IS THE ARTWORK ONLY WHAT WE SEE?

On Paula Nishijima’s ‘Game of Swarms’ 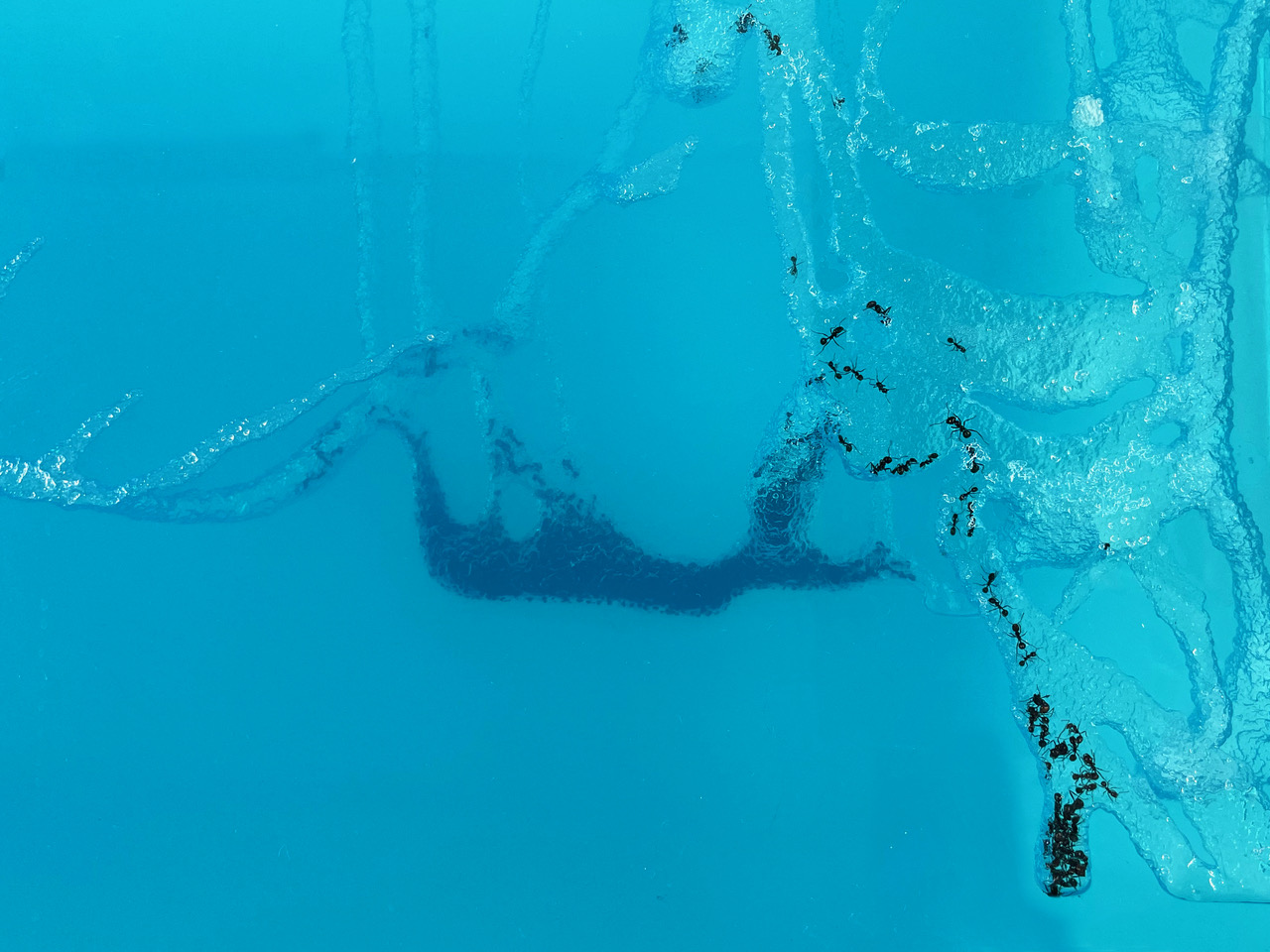 Visual art has served for hundreds of years to ensure the documentation and archiving of traces of human life. This documentation was first started by early humans who wanted to transmit to future generations their habits and traditions. Through Paula’s artworks, art has served science. Science, in return, has also been a source of inspiration for artists: artists who cross scientific research and everyday life, such as Susan Aldworth, who takes neuroscience as a source of inspiration.

This multidisciplinary approach is the starting point of Paula Nishijima’s creative process which gives birth to the series of works “Game of Swarms.” By involving science and art, this approach helps redefine problems outside of normal boundaries.

A video in a dark corner is interrupted from time to time by sun rays emanating from a coffee break corner. A noise of beats attracts you. An animation of swarms in an unidentifiable space; linked organisms, interrelated without a kernel. They communicate, create new links, connect and interconnect without explanation. The sound comes back. The images look like a heartbeat, or rather like the flow of red and white blood cells in our veins—similar to those science videos we used to watch in school. Sound integrates this beautiful melody into laughter and indecipherable discussions.

A new macro interpretation appears in the meantime: a focus on exchange, networking. The human being is supposed to be a living example of organisms that work together, exchange and produce, as described in the sociology book of Ibn Khaldun. But the more the video advances, the more we see no nuclei that linear relationships multiply. Is the human being a good example? Every encounter has a subject, and each work forces a hierarchy. The centralization of tasks is a practice strongly adopted in our life, but it seems so strange now—strange when you compare it to life and daily life, where everything has a vertical structure.

“The video was supposed to be accompanied by an installation of swarms of ants,”* in order to illustrate an organic organization of beings without intervention and without centralization. Decentralization translates into individual power within a community. Where one acts and reacts. The ants were unable to adapt to the environment, however, so they were removed from the facility.

Another illustration of the adaptation and organization of individuals, as well as their response to the environment, was explored in the same location next to the installation, through a workshop. The workshop was a game that encouraged people to create structures without creating a center. The game, the forms, and the collaborations with the research engineers are the invisible side of the work. 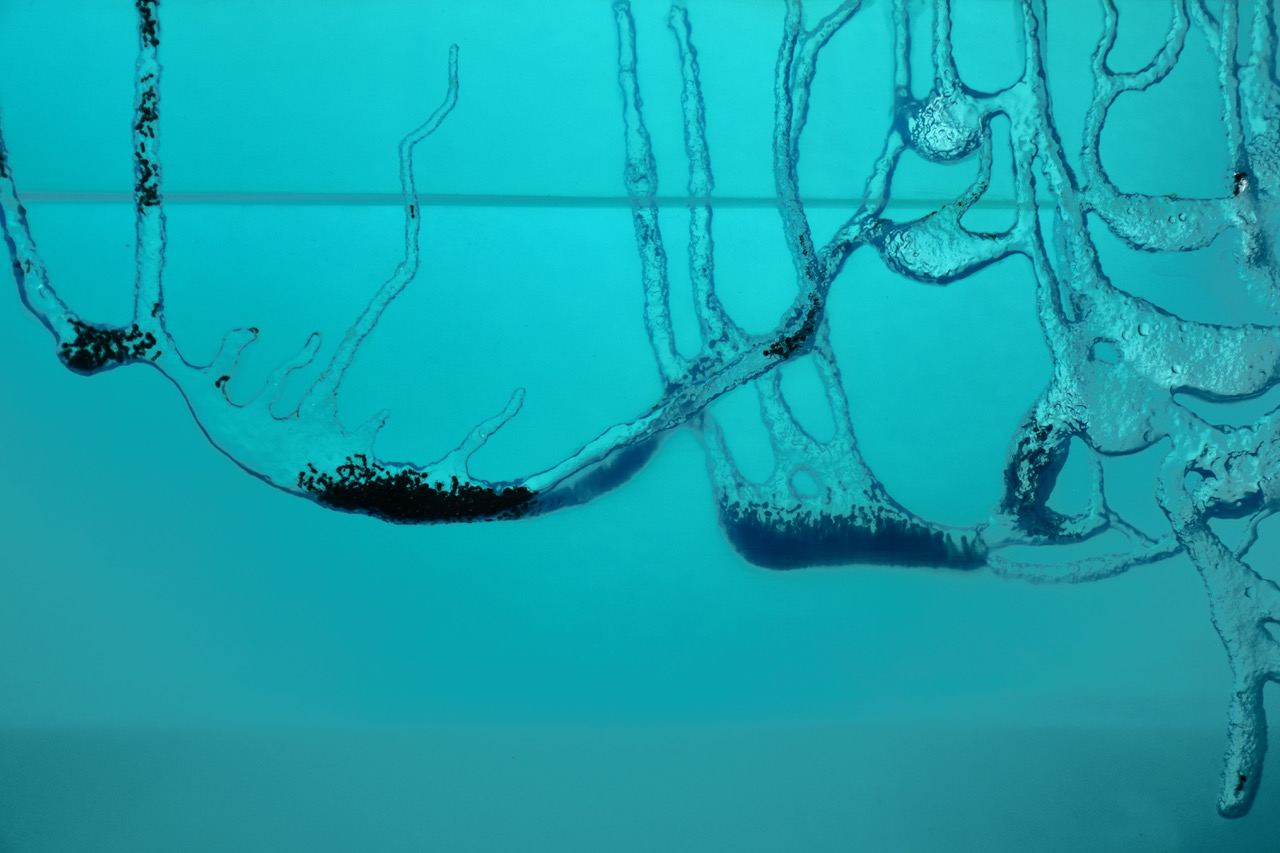 The opportunity offered by Media Art Friesland is a platform for emerging artists to access an audience and showcase their works, which allows them to get feedback and develop further. Today, the Game of Swarms series is still in its infancy, because the conceptualization of this series started in 2018 and what was presented by Media Art Friesland is only one element of the whole project. What we encountered at the festival is the part titled “Life lived along lines”, which aims to explore a “deviation of human behavior closer to nature and away from the standard of societies”.

Imagining the work in its corner of the festival building with the sound of people next to the cafeteria plunged me back into another moment:  navigating in a stream of cells and neurons invisible to the naked eye, yet very close to reality after so much reflection. Would the movement of swarms that were only imaginary elements in the artist’s world be enough alone to convey this idea? Even if  “an artwork is never done to convince the audience”?

*All the quotes are from an unpublished interview with the artist Paula Nishijima.

Syrine Bettaleb ali is a Marketing research Student and Marketing manager of an online gallery, making her first steps in curatorial practices. She is based in Tunis, Tunisia.

She is influenced by the culture of her region and history. This makes Syrine always look for what is behind the things she says, because she does believe that this is a big part of the actual representation of things. Trying to be part of the bridge between the eastern and western contemporary, Syrine Bettaleb ali is part of TASAWAR CURATORIAL STUDIOS .