A cold metal world floating on an even colder sea 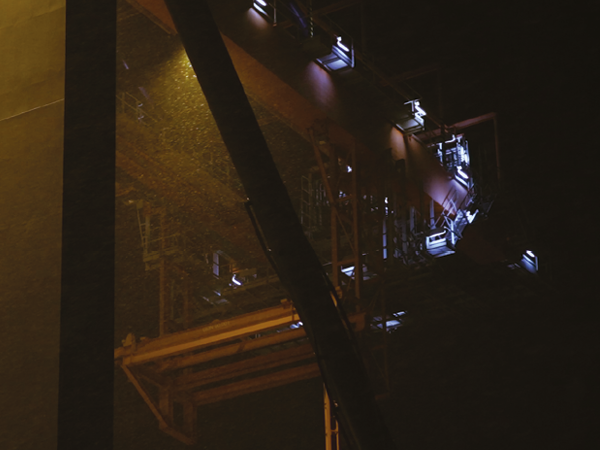 It is dark and silent on board the MS Anina, as well as in the infinite vast sea, indifferently lifting the motor ship. Unrecognizable shapes that could be either ship or sea fill the screen. Because of this, the room I’m in is gently filled with light.

I think it’s neither ship nor sea; it is ice.

Now, the shapes are no longer abstract. The ship arrives in the harbour, and there is a clear distinction between the industry and the world. Next to the harbours’ machinery are hills covered in trees, cars drive by.

The artist describes the video as “documenting a voyage on board a container ship, crossing into Baltic. It takes the form of a film essay without a narrator.”

What is this film essay made of? Is it metal, rain, and ice? The cold radiates from the screen, but it doesn’t reach my body, wearing a woollen sweater and sitting on a comfortable couch. The floor sparsely illuminated by the video is scattered with black pillows, making the room even more comfortable.

In documenting this voyage, the camera keeps changing perspectives. At first, it shows forces of nature portrayed in such a way that is truly beyond scale, which I believe is typical for such incomprehensibly large actors.

As soon as the ship enters the harbour, we enter a more human frame of reference. Ship, water and ice start to separate. The harbour is inhabited by a handful of workers and a very large amount of metal in the shape of shipping containers, cranes and other infrastructure that is not familiar to me.

I feel alienated in this world.

The boat is back on the sea, and as soon as the harbour is out of sight, I lose my human sense of scale again, and again I am under the spell of the sea. Now, having experienced how human scale looks on this screen, the boat looks even smaller, the shipping containers granular. Crude but structured, like the tiny grains of sand that make up concrete. 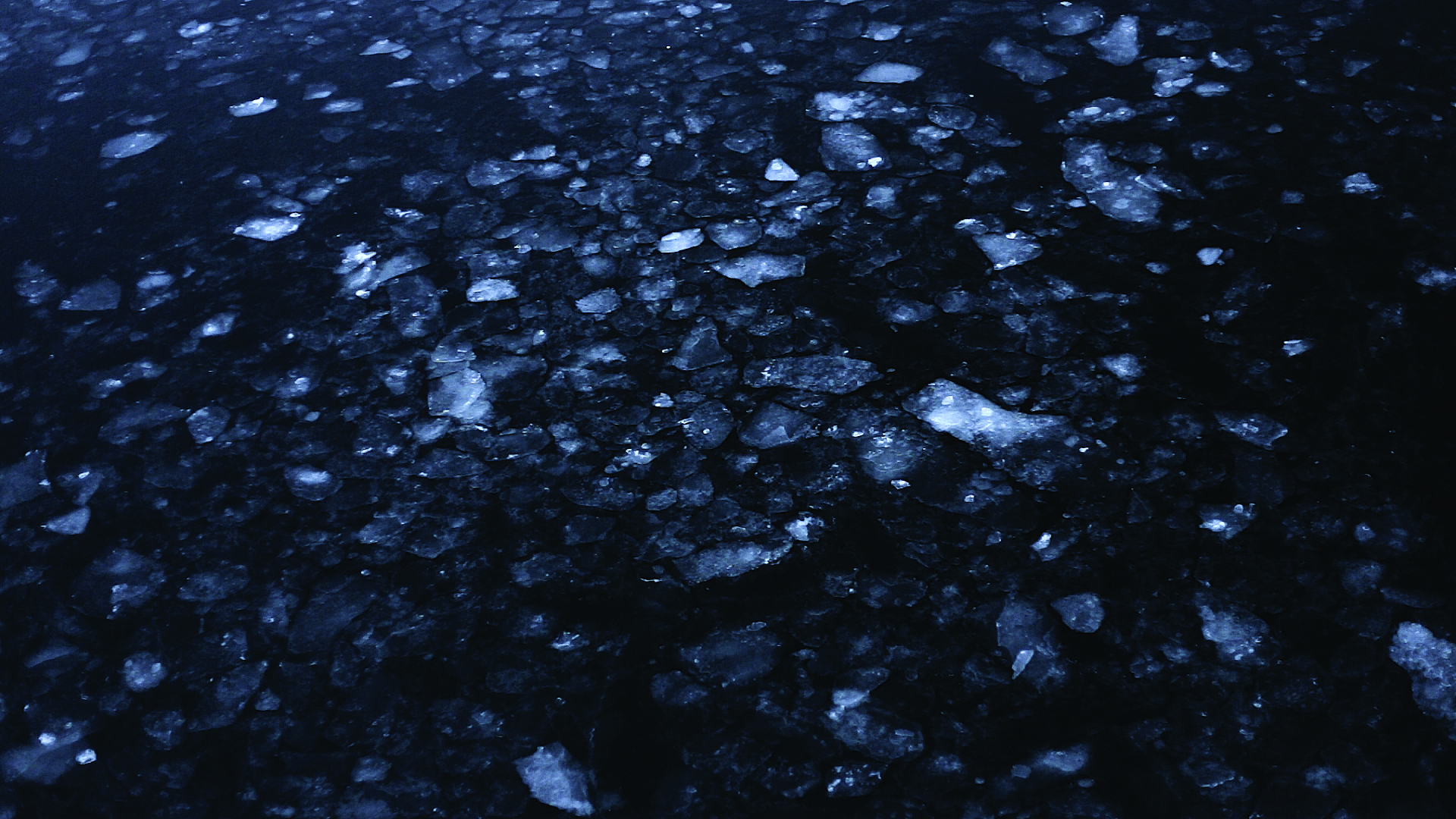 Alcaeus Spyrou presents himself as a filmmaker and highlights three films on his website: ‘Pave PARADISE’ (2022), ‘Why the mountains are black’ (2021) and ‘Anina’ (2017). Why the mountains are black is a documentary-style film with a similar length to Anina. The film shows a small team of ethnolinguists interviewing Greek-speaking elderly women in the Albanian region of Himare. In this film, the interviewees’ language is mixed with images of sea, mountains and overgrown cultural landscapes. Anina also plays with these cultural and natural perspectives: the man-made boat and the sea.

In Why the mountains are black, the story is spelled out for the viewer and put in front of impressive imagery of  mountains and sea. In Anina, the incomprehensible large forces of nature become the subject instead of the decor.

With this twenty-minute long video, Alcaeus Spyrou won the audience award at the Media Art Festival Friesland. This is not the first time the film won a prize, and it was shown at several before MAF’s Young Mmaster’s exhibition. According to Spyrou’s website, the film has been shown at several film festivals (a.o. Athens, Lisboa &  Prague), was broadcast by the Greek National Broadcast Corporation, and won the 2018 Swedenborg Prize.

The screen the video is projected on, not much larger than one you would use for presentations, is a safe barrier between me and the cold metal world floating on an even colder sea. It prevents me from fully immersing myself.

George Mazari’s film “Dream of desert land x1” at another location in the festival is projected on a screen that has the same dimensions, contributing to my feeling that a standard screen size is used, therefore bringing the video exploring the scale of nature, machinery, and humanity back to a safe human scale. Too human for my taste. Too safe.

On a lifebuoy is the text MS ANINA. 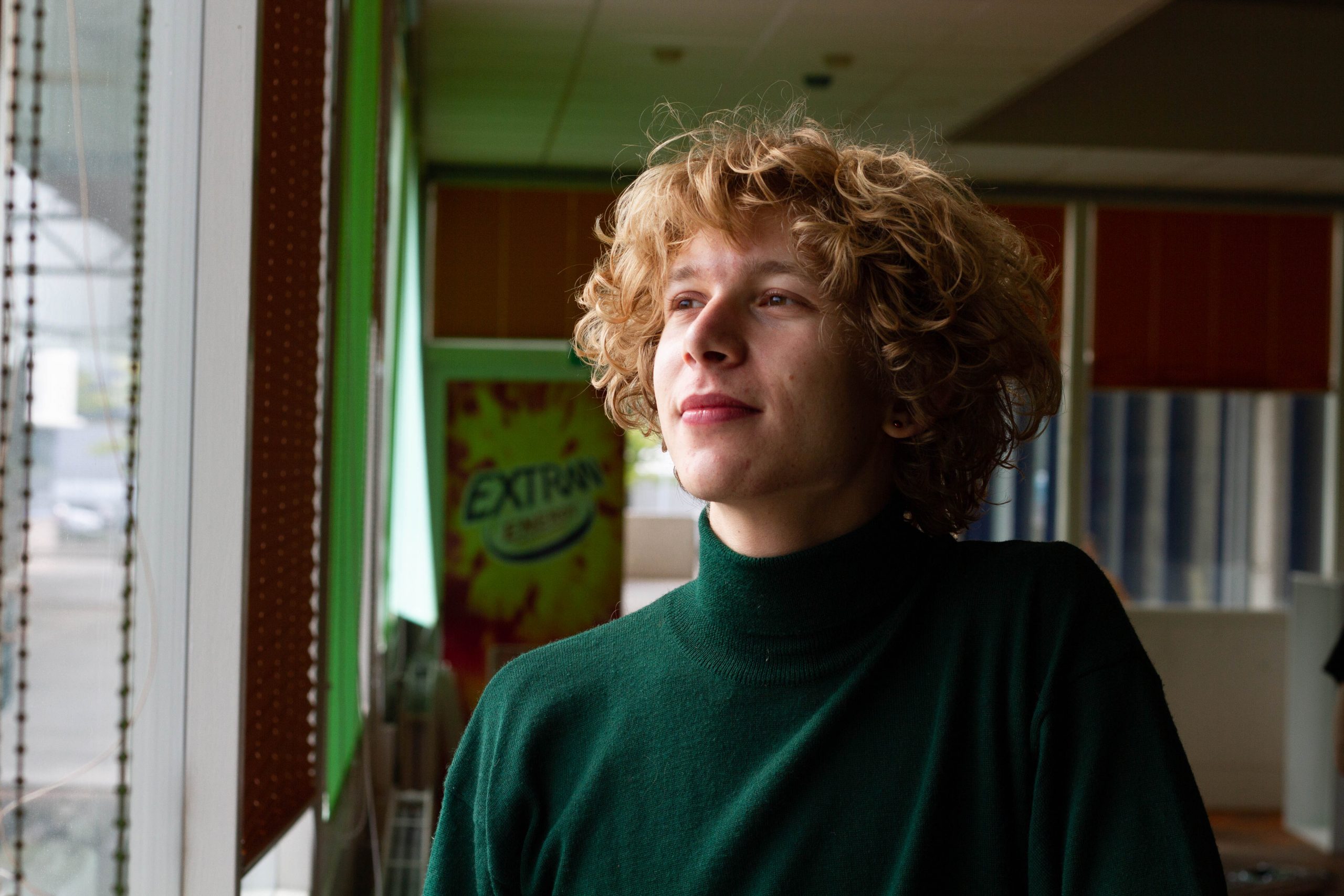 Jan Herman de Boer (they/them, he/him) works as an educator and artist, in these intersecting practices they use sculpture, performance, and video. They employ humor, friendship, partnership, and the absurd in navigating the cultural field and the world of arts education, frequently touching upon curatorial practices.

They received a BFA in fine arts and design education (NHL Stenden 2020) and are currently studying for an MFA in applied museum and heritage studies (Reinwardt Academy). They currently live/work in Amersfoort and Leeuwarden.

At the Media Art Festival, Jan Herman’s work can be seen in the educational program, where they create tools that can be transformed by students into interactive media artworks.