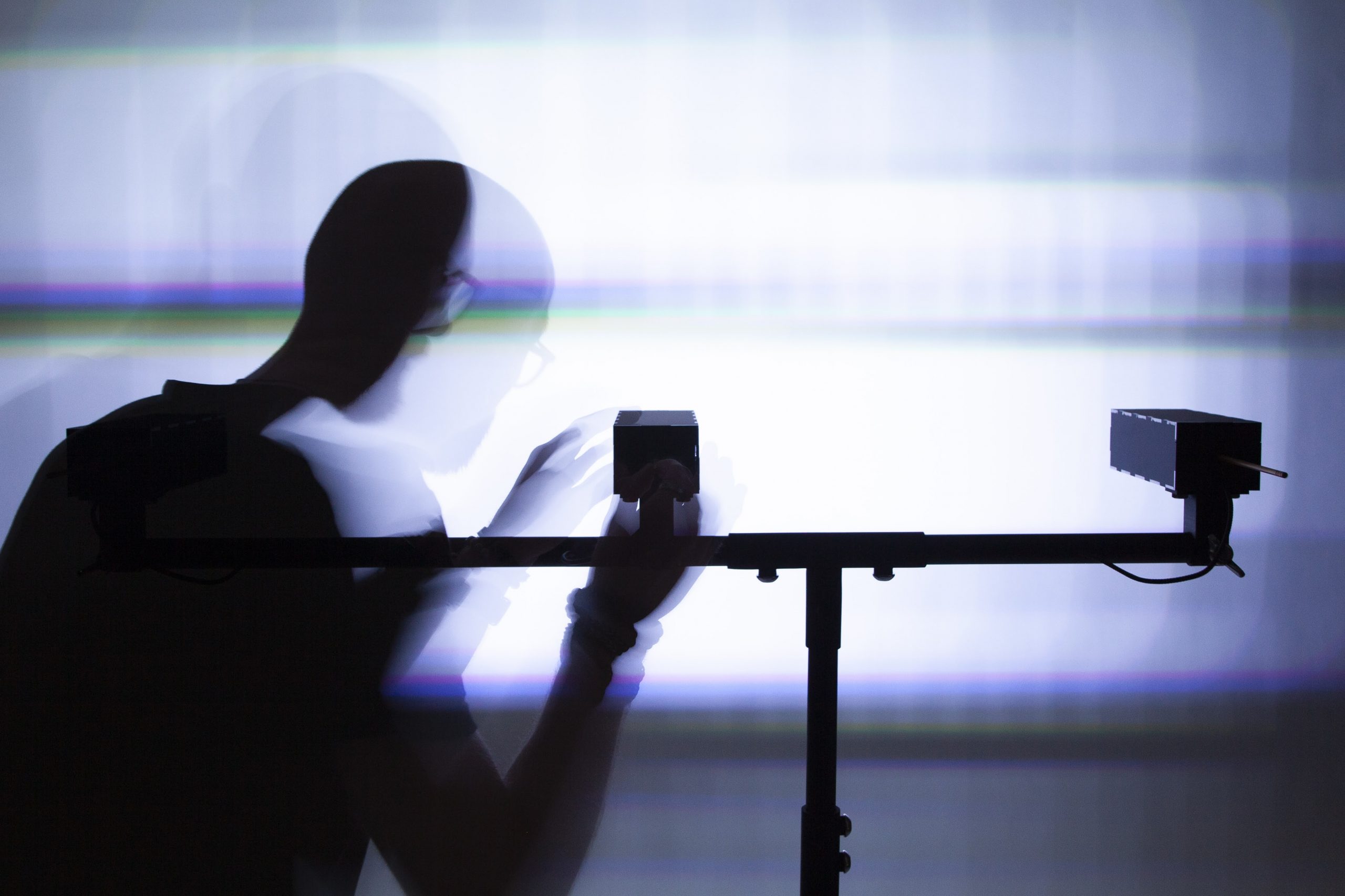 Placed in the very last corner of a labyrinthic exhibition space we find ‘Derailed’, a work by Joris Bosma. The piece consists of a 150 cm tall, tubular structure, with a three-headed transversal LED lamp on its top. Perceived as a thin, anthropomorphic figure, this object stands on a non-centric spot of the room. From it, fleeting shapes of light are projected. They rush from right to left, briefly illuminating the space.

After observing them for a few moments, these abstract shapes become more nitid, and they assume a familiar rhythm of motion. Finally, we identify the ghostly silhouettes as the contours of the traditional windows in Dutch trains.

Their shape brings to the work the immediate impression of an inside and outside division. As observers, we feel that we are standing in a silent interior space while watching the outside pass by. The lack of sound to accompany the movement creates a suspended atmosphere.

The small exhibition room in which ‘Derailed’ is placed—its width and length are that of two people with their arms open—is one of the many spaces of the Stationskwartier, Leeuwarden’s former post office, where the Media Art festival takes place. A building bordered by the railways leading to the central train station of the city.

This space is also defined by hosting the entrance door to an old safe box on one of its walls. An object which certainly evokes stillness and acoustic isolation. However, the interaction of the projections with it might not have been the artist’s best choice. The safe is a thick and heavy element that, in my opinion, overpowers the lightness and sensitivity of Bosma’s proposal, becoming a loud presence.

On the contrary, although it is the only material element of the artwork in the room, the intriguing three-headed critter does not emerge at first sight. Firstly, I felt the void of arriving in an empty space—my eyes were expecting one more shiny screen, perhaps. Only after a less-anxious scan could I notice the thin object standing in front of me. Minimalist. Portable. Carefully crafted. A kind of picket inviting me, the observer, to select a standing position from which to contemplate a white light crossing a white wall.

For some minutes, I stood still, observing the rhythmic, automatic movement present itself. I enjoyed the moment of silence in the middle of a busy and celebratory festival mood, taking place after almost two years of events’ restrictions.

This resonated with the intention of the artist who, as I learned later, created this work as a response to pandemic times. The piece has an actual function, which is “to preserve the calming feeling of travel for people who are temporarily or permanently bound to their homes”.

‘Derailed’ is, in fact, a reflection on traveling that evokes our sensory memory, and proposes to take on a state of evenly-suspended attention—that kind of direction-less listening/observing which allows us to remain open to whatever connections our brain may reveal.

In the work, public transport becomes a place for intimacy. An empty space to fill in with loose thoughts. But although poetic and introspective, the work of Joris also encloses a sense of depersonalization. This, perhaps, is triggered by the programmed rhythm of the perspective projections and the thin RGB edges produced by its LED light. There is a certain feeling of displacement. We are on the go, and out of our usual place. We move on the inside of a machine.

On this point, the work of Bosma establishes a dialogue with Anina, a psycho-geographic film by the artist Alcaeus Spyrou. The piece, presented at the very last spot of the exhibition circuit, reflects on industrial landscapes and mechanical choreographies by portraying the dynamics of container ships’ trade. Both works situate the observer on a moving vehicle—one of big dimensions—playing with Newton’s relativity of movement, and reminding us of our hopeless aspiration to ever stand in a fixed spot.

In both pieces, scales are rarified and tempo is expanded. Yet, the only picture ‘Derailed’ invites us to observe is a reflection on the white wall: immaterial, ethereal, and distorted. Constantly vanishing. Through it, Bosma invites us to find a still reference point from which the movement of an absent landscape can be observed.

The piece combines a rationally decided object—perhaps a hint on the artist’s background as a product designer—with a subtle sensorial experience. It creates a contrast between a carefully delimited structure and a diffuse image.

‘Derailed’ by Joris Bosma invites us to rest still, allowing space for our own imaginary landscapes to emerge. We are seduced to a hypnagogic state, knowing that we might miss our next stop, and we are invited to stay suspended in between reality, dreams and memories. 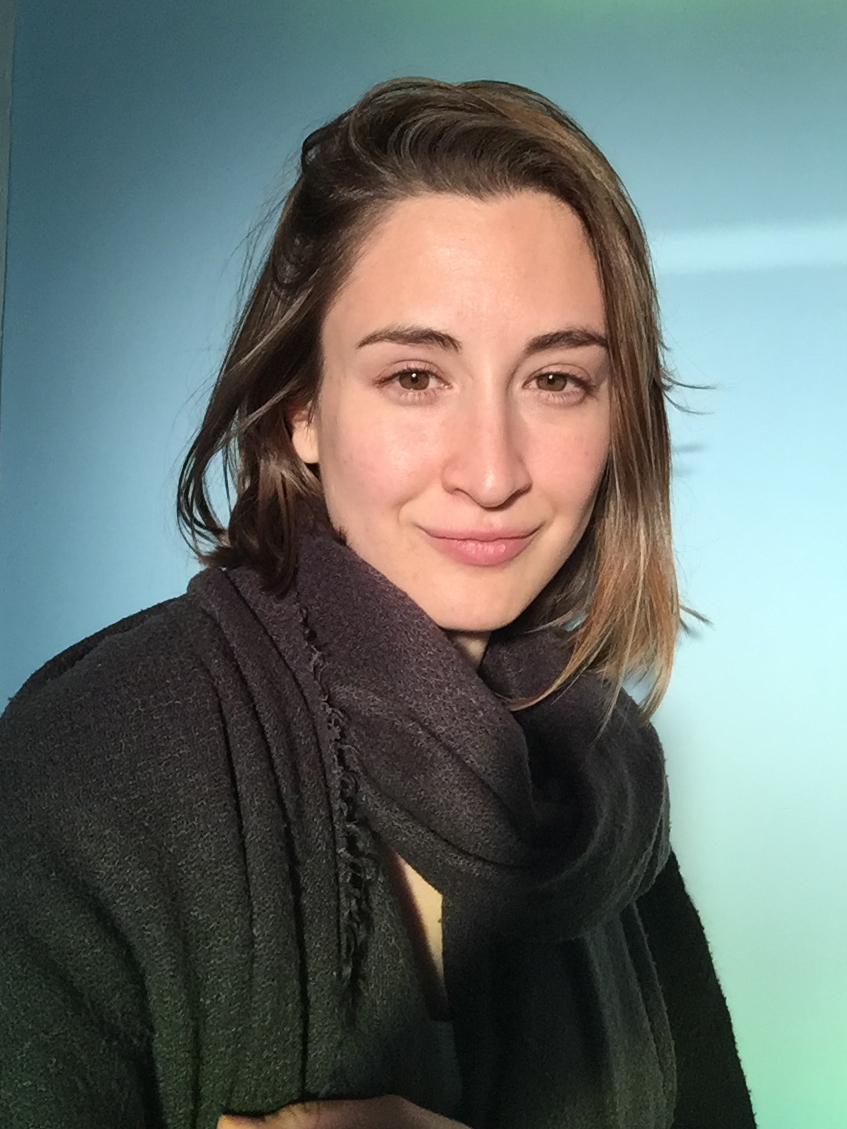 She graduated as a Graphic Designer at the University of Buenos Aires, where she also collaborated as a lecturer for over 5 years. Her interest in the conceptual analysis of creative processes led her to pursue a Masters in Theory and Investigation of Project Disciplines (DICOM) at the same university.

Currently, she collaborates in project conceptualization and management for several AIR programs, and, since 2018, has been the Coordinator of  AADK Spain’s Residency Program, a project based in the rural área of Valle de Ricote, Murcia.

She intertwines her work as a Cultural Manager with her practice as an artist, where she explores the possibilities of organic and ephemeral materials.