The cycle of creation in three layers 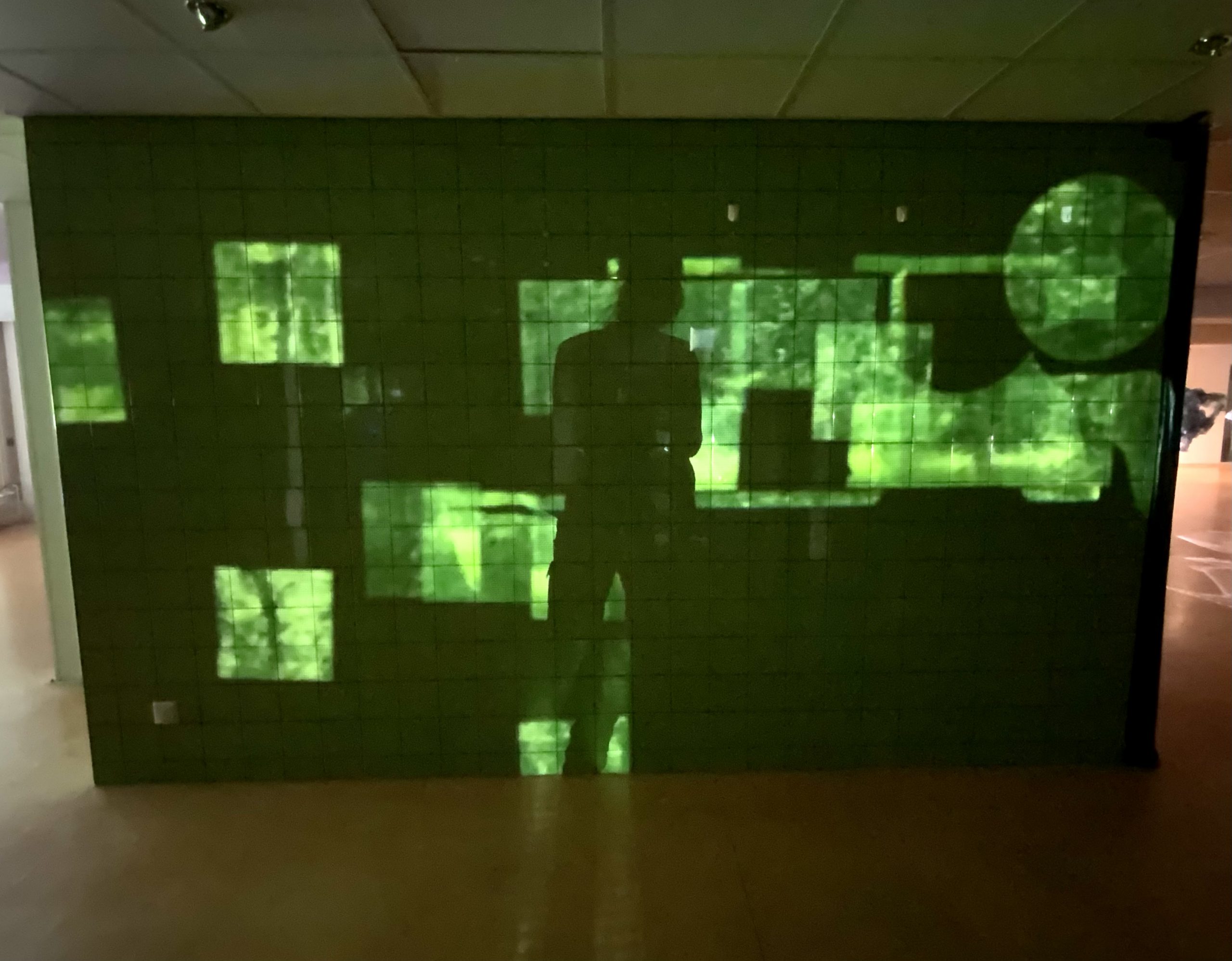 The quiet and calm atmosphere invites the audience to the main hall. The various installations make the light shimmer in different colors and soft, monotone music can be heard. A single, almost lost-looking detached wall divides the back part of the hall in two. Emanating from Haifa Ouerfelli’s installation, the left side is drenched in green light and transforms the otherwise nondescript, gloomy space into a place to receive and linger.

In the center of the newly defined open room, a projector is shining a video of green floating nature onto a small shiny green tile wall on the left. Mirrors attached to the wall reflect the video onto the opposite room divider. Here the film can be observed as though through small windows. Perhaps a forest with bright green deciduous trees, meadows or an avenue? It’s hard to say; the image is shattered into pieces and spread in single parts. Distorted in arrangement and perspective, the green appearance is rendered partly in neat rectangles, but also in overlapping shapes. The light spectacle is completed by the shadows of the observing people. The movement of bodies becomes part of the image, shattered and distorted; video and shadow merge into a new composition.

The Young Masters exhibition at the Media Art Festival Friesland in Leeuwarden (Netherlands) was not the first time Haifa Ouerfelli exhibited Imaginarium. In 2019 it was part of the Young Master program at the SEE Djerba Biennale for Media Art, and later in the year it was shown at the Undark Festival in Yekaterinburg (Russia). The installation transforms with each setup, space and environment. Haifa Ouerfelli developed Imaginarium within the framework of a study project at the ESSTeD (Ecole Supérieure Des Sciences et Technologies du Design) in Tunis, where she did her bachelor and master studies in interior design. Currently, she works as a freelance interior designer and artist. Therefore it is not surprising that she has a good spatial connection and is able to transform a room with her colorful and figurative light installations. “As an interior designer I learned to pay importance to the smallest details, to get out of the typical perception towards a deeper connection of an interior space.”
For this transformation process, Haifa Ouerfelli emphasizes a recycling or upcycling process and uses forgotten, unused or apparently defective materials such as broken mirrors, old fiberglass or CD’s and DVD’s. In combination with analogue animation techniques, using light and color by projecting videos and pictures, she reshapes them into something new, something worth seeing. “I think an artwork shouldn’t create waste. I don’t want to be the cause of even more pollution. So why don’t we give (an old material) a second life? Why don’t we give it meaning? It is something that has character, something which has history.”

In talking about the motives behind the installation, Haifa explained that Imaginarium is the artistic translation of how people perceive, of how everyday images and experiences are consciously and unconsciously captured and further processed in dreams, actions and also artworks—as it can be seen in the work of Frida Karlo or Savaldor Dali.

As I slowly drift, blurring with the green and making my shadow dance with the image, thinking about Haifa’s narratives and perceiving the structure of ‘Imaginarium’—from the beamer, to the mirror wall, up to the reflection—I imagine the process in three layers.

The first layer of perception, followed by processing, leads to a new, experiential result.

The beamer stands inconspicuously in the center of the installation and projects a video of shiny green nature in a continuous loop on the green tile wall. Like the eye, it transmits perceptions, observations and impressions so that they can be processed.

This does not mean that everything visible is consciously perceived. Thus, the large green wall struck me as an irritating room divider; and the small opposite wall I noticed, but could not remember afterwards. That both are covered with shiny tiles, I noticed consciously only through Haifa’s work.

Haifa, on the other hand, consciously looked at the place. She perceived the light, the color and feel of the space. “I stood in the middle of the space, turned around and saw this sad, lonely green wall. But parallel, at the opposite side, there was another surface in almost the same color with the same grid. It was almost a composition.”

I would have incredibly liked to get inside Haifa’s head and experience how her perceptions were taken apart and reassembled; how based on her observations and interests a whole new world was created. Anything is possible, and thus Haifa’s world of thought created an open, interactive space out of the gloomy part of the main hall.

Processing, the reshaping of what is already present into a new experience, is so intense and colorful, and yet it lies hidden from the outside world. It takes place behind the scenes, in Haifa’s head or, in the case of the installation, on the small green tile wall covered with the mirrors. As in the head, perception, in this case the video projection, is re-sorted by the many receptors; namely, the thirteen mirror surfaces that either blend into the tiled pattern or overlap. The mirrors are slightly off the wall at various angles. Through the precisely matched projection, each of them is framed by the flowing green video. In this film, a lot could happen, and yet it is barely visible through the mirrors.

The process becomes visible on the large tiled wall opposite, onto which the video is reflected through the mirrors of the second layer. It is the reflection described at the beginning, which enables the audience to dive into the fractured natural world through light and shadow. This result is based on the nature video, yet it is very different from the original. It is distorted, and shattered; transformed in its viewing and playback possibilities. Due to the previous processing, the result can differ fundamentally from the underlying perception in the form of expression as well as the transported content. ‘Imaginarium’ is thus the transformation of Haifa’s perception to a new, experienceable result. This result can in turn become a perception, just as ‘Imaginarium’ became a perception for me, my first layer.

However, what is perceived and what results from it depends on one’s respective interests, environment and experiences already made. Thus, Haifa’s installations reflect her perspective and areas of interest, from light and shadow, space, various used materials towards her interest in human thinking and processing. Haifa spoke of these inspirations and caught my attention even before I saw and experienced her work. I was allowed to accompany her on the journey from construction to completion. Despite the accompanying ups and downs, I was pleasantly surprised by the end result and still there were some open questions. Why are the mirrors partly used and broken and partly new? The arrangement is neither entirely accurate, nor is it entirely intuitive. Is this play of new and reused, of ordered and disordered intended, or did Haifa not entirely value her principles?

The video was mysterious to me until the end as well. Like the mirrors, it does not follow a consistent path for me. The structure of nature is recognizable but distorted and therefore not definable anymore. Why this nature video? Could it have been an abstract video or one that conveys a clear message?

These open questions did not prevent me from enjoying the spectacle, either merging with the artwork myself, but also observing the visitors interacting with the work. Because at the end, all the narratives, observations and experiences led me to define the three layers which I have described in this text, and thus in my result. This result can become again a new perception and a part of the colorful world of thoughts; a part of an always continuing cycle…

* Famkje Elgersma: Interview with Haifa Ouerfelli. Bremen | Tunis via Phone. 18 November 2021. Manuscript unpublished. Refers to all quotes of the artist in this text unless indicated otherwise. 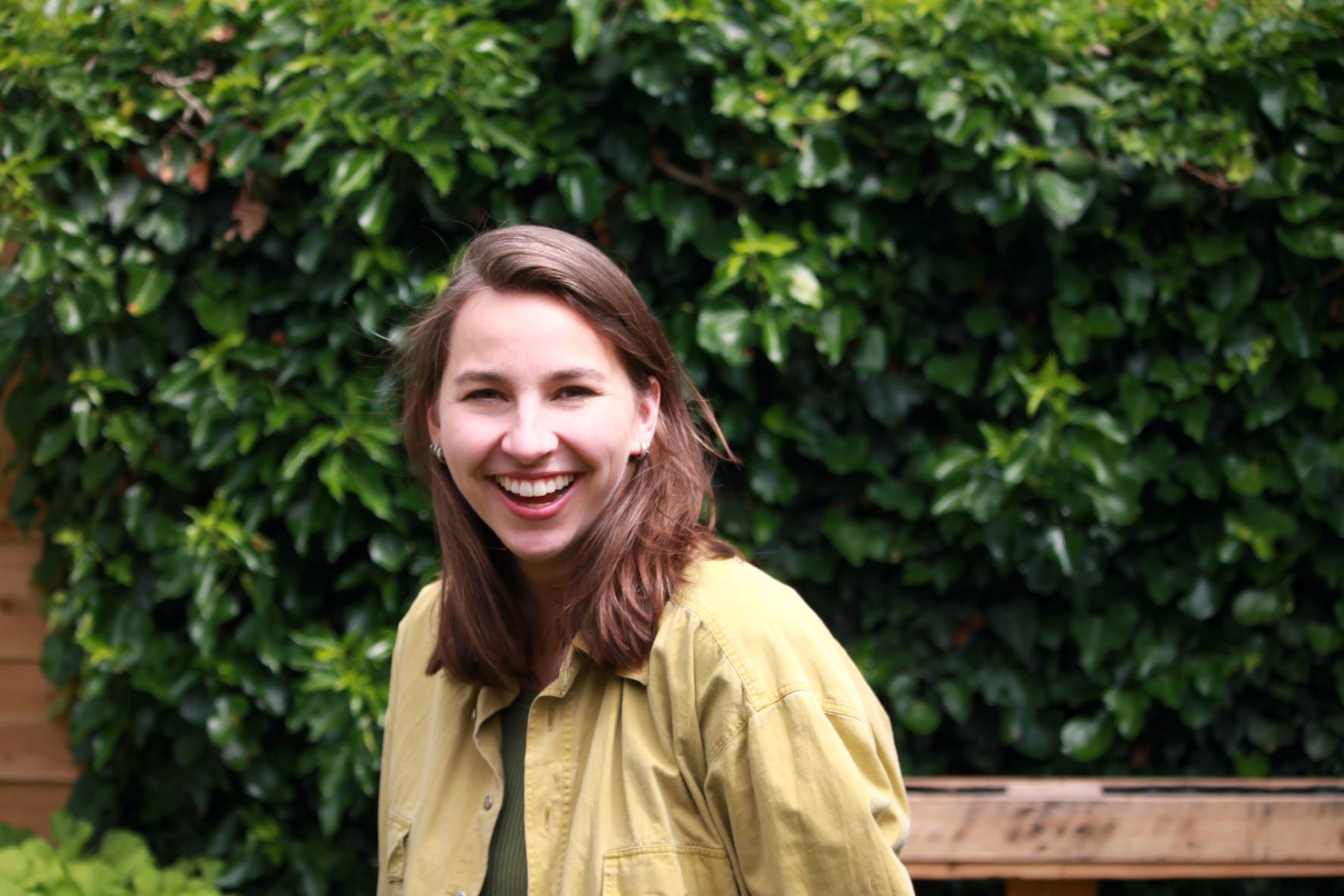 Famkje Elgersma (she/her) is a designer with a focus on social and ecological structures and a curator in training, based in Bremen (DE). Through her training as a theater pedagogue at the theater Tempus fugit (2015–2017), her Integrated Design studies (2017–2021) as well as being part of the second edition of TASAWAR curatorial studios (2020–2021), Famkje Elgersma combines various disciplines. She is interested in the design and structures of space and society and the effects on human interaction. Famkje Elgersma uses art and design as a means of expression to communicate, to reach people, to connect and to work together on imbalances.