On Lan Hsin Tu’s ‘Could they be worn or not?’ 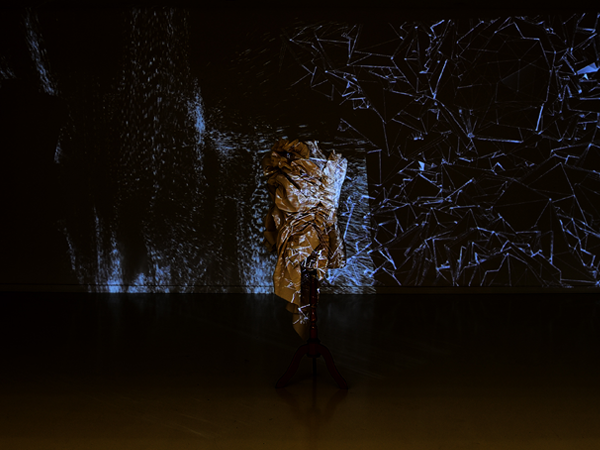 One of the artworks on display at the entrance hall of the Media Art Festival is by Lan-Hsin Tu. It is an installation composed of a series of textile sculptures, hanging freely in space, embedded in an animated graphical projection. The different elements as well as the esthetic properties of the surroundings form a walk-in visual scape.

“Could they be worn or not? This question always pops up in my mind and appears to other people when they see my works. They look like untouchable and fragile ‘artwork’”, she stated in an interview that took place alongside her participation at the 2021 edition of the Media Art Festival (MAF) in Leeuwarden. Lan-Hsin Tu received her master’s degree in 2020 from ‘MADtec’ at the Hanze Minerva Art Academy in Groningen.nl, a study program that features artistic research on media and technologies. During her studies, she shifted from applied textile and clothing design to a rather artistic approach, still with a focus on the interaction of textile materials and embeddable technologies with the human body. Since 2018, she has been exhibiting regularly, mainly in the Netherlands, MAF is her first display beyond the academic contexts.

I asked the curator Irene Urrutia for her reasons to include Lan-Hsin Tu in this year’s selection, and she stated that she “found the interdisciplinary approach, combining fashion and electronic components, both interesting and a good addition to our exhibition, since it’s something a little different – also in the sense that it’s a far more sculptural and spatial than many of our other works. I also liked the pieces visually, but especially the invitation to touch them and experience them through the positions and motions of your own body.” Lan-Hsin Tu also features the work’s touch-ability:  “I do like physically interacting with these works, as well as seeing how each art piece influences each other and the human body and other objects … I encourage audiences to touch and become close to them, to have a conversation with them.”

“I liked that she is inquiring and speculating about the future of humanity with wearable technology (so a very future-oriented approach) through a very tactile focus on materials and the body”, explained Irene Urrutia. Currently, artworks that refer to ideas of embodiment, enactment, immersion are often called performative or interactive, but perhaps they are better described by ‘experiential’. By referring to the reality of senses, the reality-producing dimension of the artwork can be recognized and included in the discourse: what kind of perceptual experiences are offered by the artwork? What are the interfaces offered? How does the artwork situate the beholder? What kind of setting does the artwork produce? What are the values and conventions inscribed in the situation? Lan-Hsin Tu’s installation is a good example of an artwork that refers to the experiences that it hosts rather than what it depicts, reflects, or displays.

Lan-Hsin Tu is knowledgeable in staging a responsive interaction of materials, objects, human bodies, and spatial frameworks. She provides a set of an esthetic situation and opens a conversation between the material and the space, performing and beholding subjects. Looking back on the development of her approach, she said: “Before I came to the Netherlands for my further study in FMI, I studied Fashion and textile design in Taiwan and majored in Knitwear design. At that time, I learned a lot about weaving and knitting, also I designed and made my own textiles. Since then, I have developed deep insights and understandings about the structure, the texture of textile. In my final year of my bachelor’s, I made a collection of soft sculptures which cover the whole body heavily. Now, I have worked with various textile materials for decades. It is the most familiar material for me, and I use it very often. The features of textile are very soft, flexible, and shapeable material. I see textile as a medium to express my vulnerability and show my personal stories. It symbolizes embracement and tenderness for me. Also, it is an intimate material for the human body. It is like our extended skin. Meanwhile, it protects me from my vulnerability and armors me. It is not easy to face and realize our own vulnerability, the textile became my method to express it.” 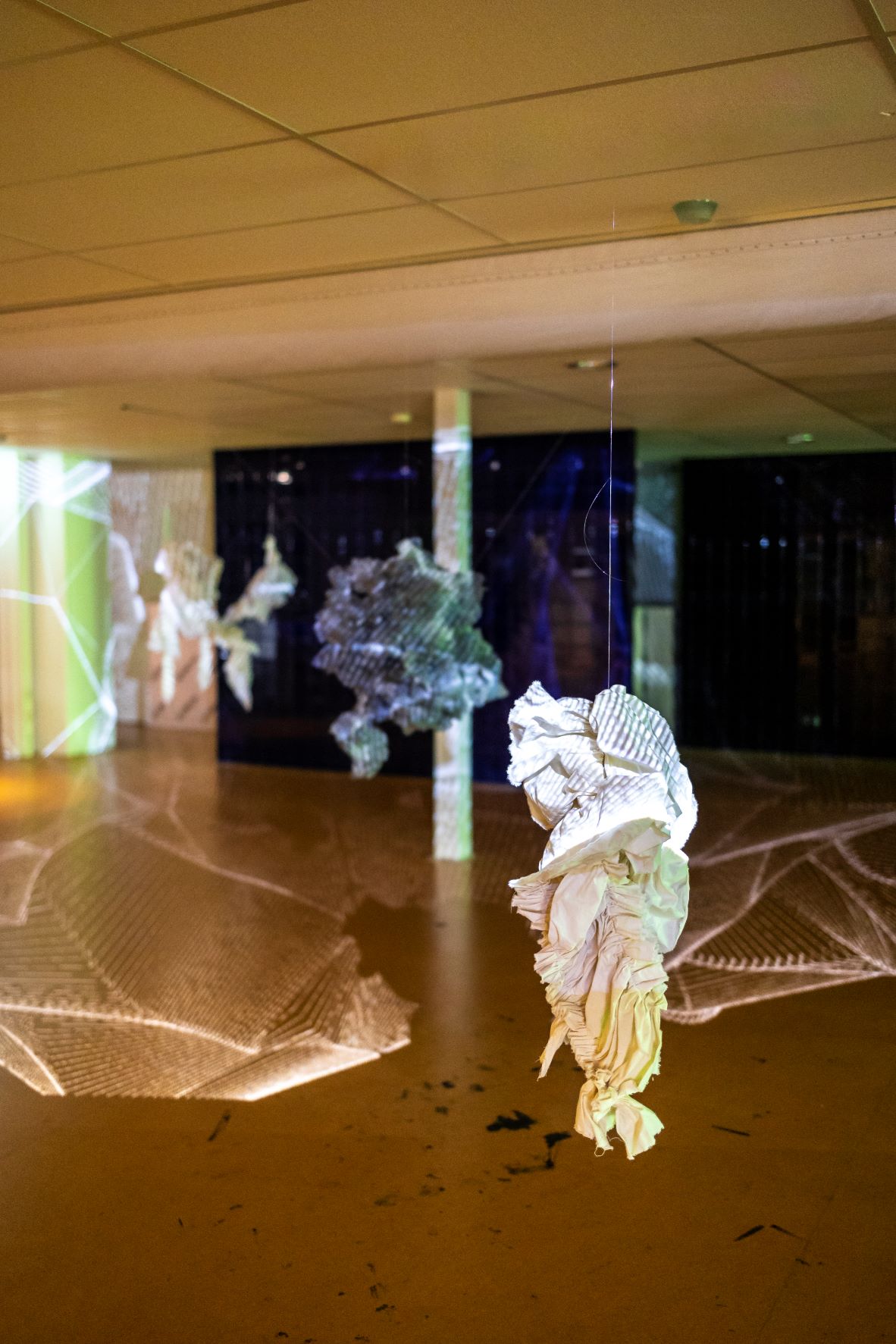 The installation ‘Could they be worn or not?’ consists of textile tissues, partly clustered, partly interknotted. In their forms and structures, they remind me of the experimental handling of material as it often happens in fashion design. But this time, they are seemingly without any function, not associated with a human body but hanging freely in space, moved slightly by the air that is moved by the visitors passing through the textile objects. “I noticed that once textile pieces attach with the human body, it makes people associate them with “Fashion” aspects. That is also the reason why, for this exhibition, I didn’t put mannequins or something like a human form in the space instead. I created a space to let these textile pieces talk to each other”, commented the artist on my observations.

The installation was placed at the entrance hall, located on the 1st floor of the ‘Stationskwartier’, within walking distance from Leeuwarden Central Station. Currently converted into a creative hub, the former mail sorting center was designed by Dutch architect Chris Vegter, and only briefly functioned as such. One year after it came into use in 1987, the national mail service PTT decided not to transport mail via trains anymore, and the large-scale building with its own platform lost its function. It and  has seen a variety of uses since. The hall is characterized by surfaces made of mass-produced, industrial materials, series of simple columns, and several wall segments covered with polished bluish ceramic tiles. The esthetic mix generates a raw, unrefined situation with the charm of the improvised. It resonates with the sense of the unknown that is embedded in the textile sculptures by Lan-Hsin Tu.

The architectural space and the material items are framed by a projection of an animated digital texture consisting of white lines. They are inspired by the bending lines of crease fabrics. A drawn polyeder structure is wandering through the projected texture, shifting, and changing its behavior. Lines, fields, and patterns are in constant motion. “The digital texture and the shape were inspired by one of my works, ‘Sensorial Wearing’ (2019)”, explained the artist. In 2018, Lan-Hsin Tu started to work with digital textures, exploring their qualities and behaviors. She takes her inspiration from surfaces, shells, and skins, in the form of materials but also in the form of data, building analog objects and data sculptures in parallel processes. “I have always been curious and enthusiastic about digital art and how technology can make art. Since I started my study here, this was the first time I contacted projection works and ‘Icosahedron’ (2018) was the starting point for me to develop my digital work. I love that projection is a good method to create an immersive experience.” In the same way, she built the installation at the ‘Stationskwartier’: the projection of the digital tissue is overwriting the analog appearances of the textile objects and the given space. It renders visible the light-responsive, reflective properties of the surfaces it encounters. Unfortunately, the onsite cubature engenders stronger reflexes than the artistic objects, and results in a visual competition for the responsive eye. When wandering the installation, it turns out that the space and its material qualities compete with the visual sensibility of the textile objects and the white lines of the projected animation.

Both the analogue textile and the digital weaves profit from their repetition: “Dynamic repetition is the way I construct my textile sculpture. It starts with a small unit and connects with others. Then these small units gather into bigger units and repeat the pattern. The moving digital texture echoes this process … “. The artist’s research is rooted in an exploration of the analog and digital materials but also by natural phenomena: “I like to watch the sky and clouds every day and observe their shape, color and texture, tiny details can really catch my eye.” For her upcoming project at the ‘Kunstpodium T’ in Tilburg, she will enhance her research into the digital and experiment with other analog materials, such as glass or metal.

Maybe there is a glimpse of the spirit of Anni Albers (1899-1994) in the work of Lan-Hsin Tu. German American Anni Albers was coerced into textiles by the Bauhaus’ gender restrictions. She took up weaving halfheartedly. During her early days studying at the Bauhaus school, in the 1920s, she set out to expand the scope of weaving by using new methods and materials and stated that, “I will take thread everywhere I can”. It turned out that she became the first textile designer to have a solo show at New York’s Museum of Modern Art. Her geometric weaves combined her interest in the mathematical intricacies of pre-Columbian textiles with an intuitive approach to patterns and color,  later that were to define Modernism. “Besides surface qualities, such as rough and smooth, dull and shiny, hard and soft, textiles also include color, and, as the dominating element, texture, which is the result of the construction of weaves. Like any craft it may end in producing useful objects, or it may rise to the level of art.” 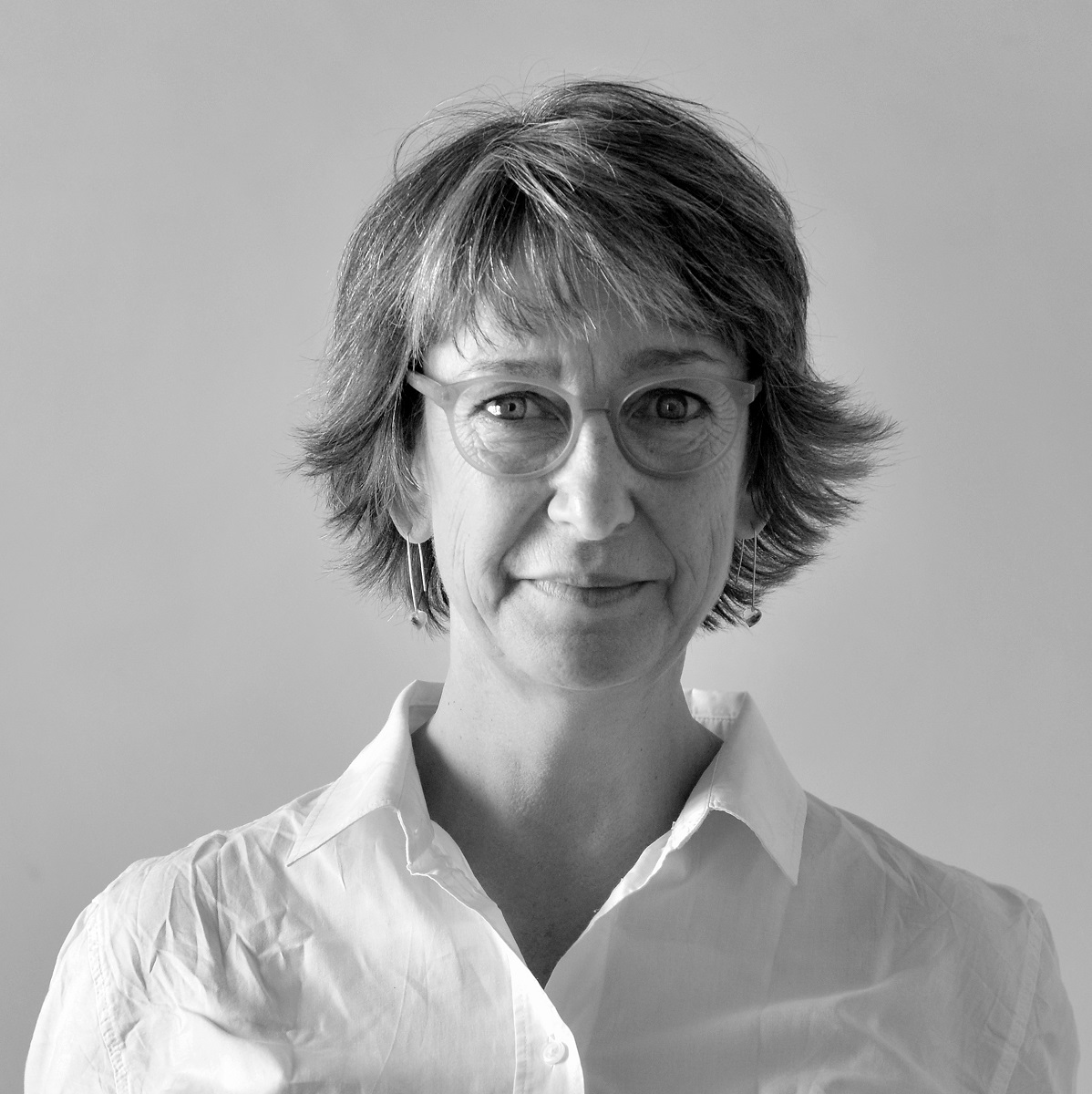 Bettina Pelz (she/her) is an internationally active curator dedicated to art-in-context projects. Her transdisciplinary projects are hosted at art institutions and in public space, in postindustrial environments and cultural heritage settings. She has been involved in projects in Africa, Asia, in Europe as well as in North and South America. Since 2019, she is directing the curatorial study program on art-in-context TASAWAR CURATORIAL STUDIOS hosted by the Goethe-Institut Tunis. She is currently based in Wetter/Ruhr (de)  and in Tunis (tn).