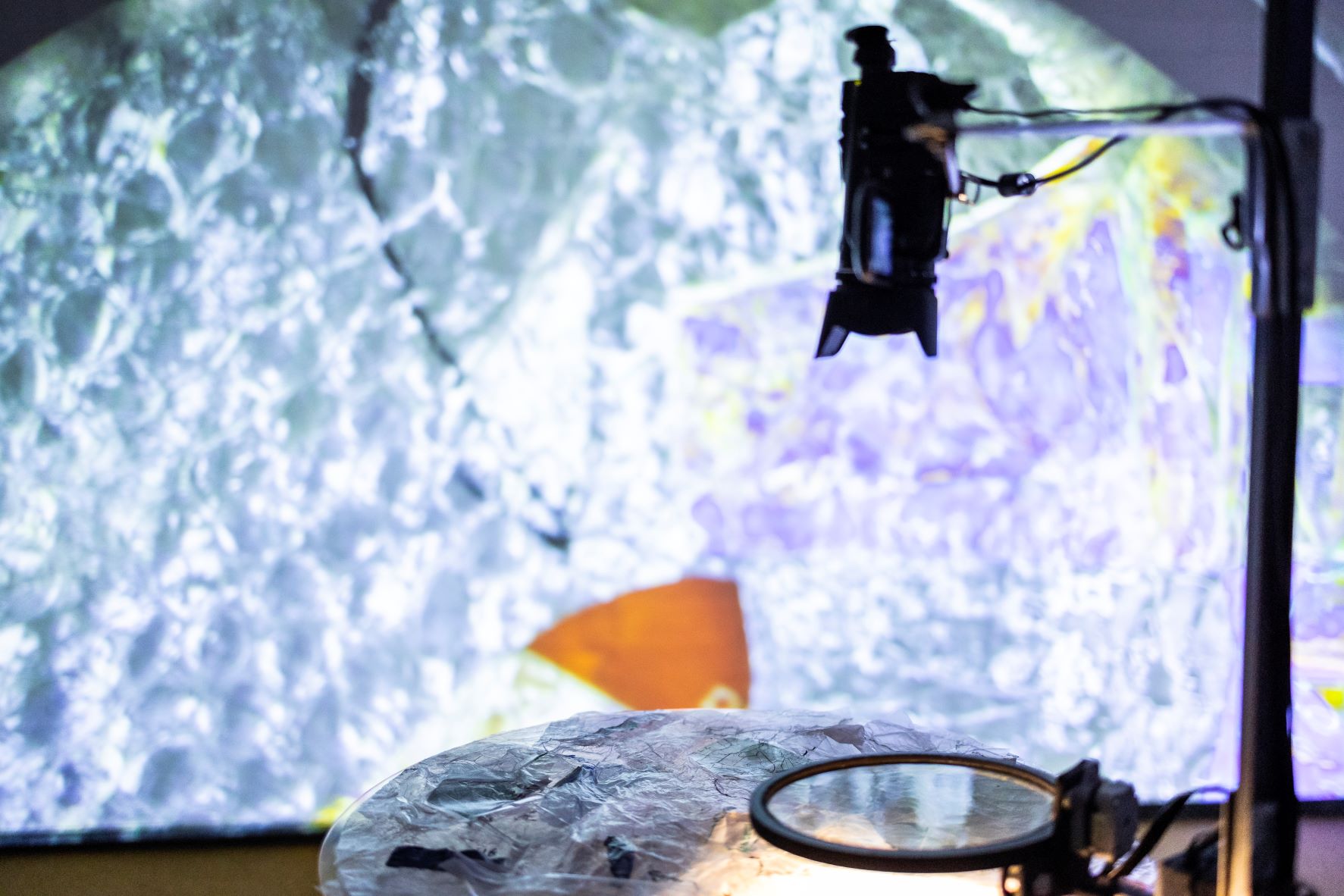 The last time I spoke to Martina was a little over a year ago. Coincidentally, it was about the exact same work. Martina was graduating from the Frank Mohr Institute and I was writing the catalogue. Then, a year later, we crossed each other’s paths again at the Media Art Festival. Martina’s nomadic art practice and my wandering around from job to job had brought us right back to the same spot. The northern Dutch art scene is a small one.

I wrote the FMI catalogue during the first COVID lockdown, meaning I had never actually seen Polarized View, or Martina, for that matter, in person. Everything I knew about the work was from verbal and written information, static pictures, and a very limited moving image within the borders of my computer screen. I wrote a short description of an artwork I had never experienced with all my senses, within the context of a specific installation, location and exhibition. Now I actually have seen, heard and felt it, and I find myself with the task of condensing that sensory information back into a written text. Because sensory information is, given the context of the Media Art Festival, what I am inclined to focus on here.

The Media Art Festival can get quite loud and overwhelming at times. There are audiovisual works and sound installations that can be heard from several rooms away. And then, throughout those sensory overwhelming spaces, there are little pockets of quiet and solitude. Polarized View is one of those pockets. When following the route of the exhibition, you arrive at Martina’s work right after George Mazari’s DREAM OF DESERT LAND X1, a large single channel video installation that produces its fair share of auditory stimulants. As we continue, right after Martina’s work we come across another one of my favorites: Elif Özbay’s Boxer, Ring, Cycle. Özbay’s work is another particularly loud installation, its beating and grunting sounds penetrating all the walls surrounding it. It gives the impression that, in order to follow the exhibition route, all you have to do is follow the noise. In doing so you’d almost walk past this one room, where there’s no noise at all, except for the muted whirring of the motor that rotates a transparent disc with an assortment of plastic waste on it. Oh, great — another commentary on plastic pollution. No; it’s a lot more than that.

Granted, I walk into this room with predetermined knowledge. As someone who tends to get overstimulated in art exhibitions and subsequently shuts down, it’s nice to stand on the solid foundation of an artwork I already know and like. Polarized View consists of a rotating polarisation filter, revealing the internal tensions in the plastic waste that Martina collects on so-called ‘trash walks’. In June 2020 she even made the local news when she did a five day long trash walk through the province of Groningen. The internal tensions in the plastic manifest themselves as fluid colors, which are in turn enhanced and projected onto the wall. The result is a mesmerizing, slowly moving arrangement of colors that seem to mutate at every rotation. ‘How does polarisation actually work?’ I ask with my limited knowledge of physics. ‘It’s kind of complicated,’ Martina replies, probably knowing much more about physics than I do. The process revealed by the polarisation filter is called ‘photo-elasticity’, and apparently there are tricks you can do with your sunglasses or your computer screen to see it in action yourself. Thankfully, you don’t always need to understand something in order to appreciate it.

The slow movement of the installation is reminiscent of what Martina told me over a year ago:how her practice as an artist became increasingly centred around movement and displacement after a painful incident that occurred in February 2020. While preparing for a presentation of Polarized View in an empty apartment in Groningen, a most likely well-meaning but clueless custodian stumbled upon the unsupervised machine and, ironically, considered it garbage. Martina returned to find an empty apartment and no trace of the complex machine she had put her money and effort into, the result of months of artistic research. After calling around in a panic, she was eventually pointed towards a landfill, where she was able to find her audio interface and some cables in the rubble. Everything else was gone. Ironically, the cleaning company responsible for the loss of her work writes on their website that they are environmentally friendly and ‘committed to re-use and recycling’. In her thesis, Martina writes: “while I was deprived of the only physical object I had to “transform garbage into enchantment”, now the presence of what is lost becomes even greater. Beauty is still part of what I do, only now it is less “physical”. The gathering walks and the stories… beautiful or sad, well, nobody can take those away from me.”

When Martina first told me this story in 2020, it became clear to me that she was moving towards an art practice that is less involved with matter and more involved with experience. It almost seemed like a form of self protection or a trauma response to make art that can’t be lost or destroyed because it had no form in the first place. When I asked her, a year later, where she stands now in these ideas, she told me she has since moved away from the idea of immateriality and now focuses on movement. “I have been experiencing the urgency of working with the idea that everything, and therefore also my artistic practice, is determined by constant movement and displacements.”

This brings us right back, with a few detours, to the current edition of Polarized View. An artwork that’s static in its installation but reliant on movement to tell its story. In earlier works, such as WASTE PICKER BACKPACK or Oltrepassare, Martina reflected on her thoughts concerning movement by building portable artworks. Today, she is developing a collaborative project called Con-Temporary studio space, along with her sister Michela Dal Brollo. It will start with a three day journey similar to the earlier trash walks, only this time Martina will follow the journey that a discarded piece of plastic would take along the Reitdiep canal and towards the sea. During this time, Martina and Michela will develop a portable studio, which will double as an exhibition space for presenting the traces collected on the Reitdiep walk. In doing this, Martina takes her mobility as an artist a step further: not only her artwork, but now her studio itself is mobile as well. What we see when looking at Polarized View, and Martina’s entire art practice, is an artist in constant motion. Even if a custodian wanted to discard her work, she’d probably be gone before they even get to it. 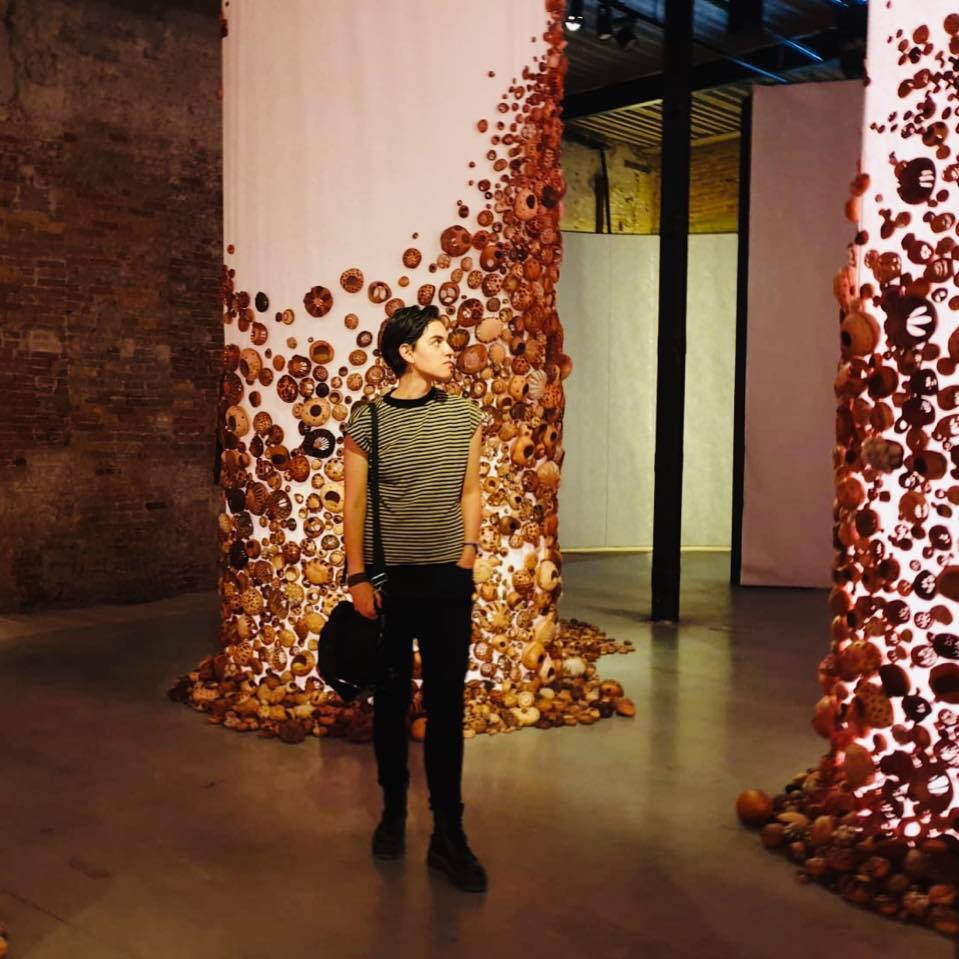 Anne van Lierop (they/them) is a queer art historian, curator and researcher based in Groningen, the Netherlands. They hold a BA in graphic design from Academie Minerva and an MA in art history and curatorial studies from the Rijksuniversiteit Groningen. They are interested in exploring curatorial possibilities outside of the context of an institution, informed by queer theory and decolonization, and questioning power structures and distribution of wealth in the arts. They are the founder of the Pink Cube, a platform dedicated to the visibility and appreciation of queer art and culture. They are a fellow of TASAWAR Curatorial Studios 3.