On Samantha Pellarini’s The Non-Human Institute for Humanity

Samantha Pellarini’s project The Non-Human Institute for Humanity offers a platform where you can freely explore your human and non-human identities. You can become a global subject, an alien or explore the familiar and the non-familiar by embodying an archetype from tarot cards.

At the Media Art Festival, I had the pleasure of experiencing the new constellation of Pellarini’s artistic project which was exhibited here for the third time. Each time, the project is adapted to the space of the exhibition. The Non-Human Institute for Humanity was the first work I encountered at the festival. What immediately caught my attention was the capsule: a triangular construction resembling both a spaceship and a cozy house. People were invited to sit inside and enjoy the feeling of being at home. With the capsule, you can either travel in space in an attempt to explore the non-human, lose or find yourself beyond our planet, and discover new ways of belonging. At the same time, the construction can be interpreted as a reentry capsule: a vehicle to come home, back to earth, to what is familiar to you. Perhaps these spaces are not mutually exclusive: you can find home in the unknown and feel like a stranger in your everyday surroundings. “Home is where the heart is,” as they say; and wherever your imagination takes you, may I add.

The capsule is surrounded by screens where different photographs are on view. They portray people who Pellarini has invited to pose as the archetypal figures found in tarot cards. With this gesture the artist encourages people to explore different aspects of their personalities, as she told me in our recent talk. “When you dress you become,” said Pellarini, highlighting not only the transformative element of the photography series, but also connecting it to what lies at the core of the Non-Human Institute for Humanity: the continuous, fluid process of discovering one’s self and challenging what belonging means. Having already recreated 45 out of the 78 cards included in the tarot deck, Pellarini asks the participants to bring to the photoshoot an object that is familiar to them. By doing so, the photographs are not constrained to depicting what is already shown in a tarot deck, but reflect the creation of a safe-space, where the participants can experiment with embodying different identities. 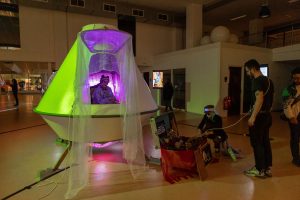 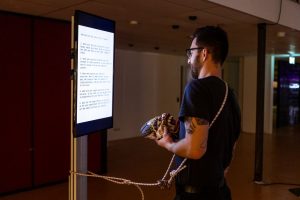 However, the photographs are not the only participatory element of the artwork. Pellarini gave performances throughout the exhibition that included active engagement with the audience. The visitors were led by the performers on a trip in space. They would then select an item from a box that included artifacts from different cultures, showcasing the globalized character of contemporary societies, and do some exercises to connect with their object. The participants would then engage in three-minute conversations with the artist reflecting on why they chose this particular object and asking the artist a question about their future. They were then given an oracle, an answer to their question. Pellarini aims at creating a meaningful connection with the audience in a very short period of time and she succeeds.

When considering the lived experience of Pellarini’s project in relation to its title, namely The Non-Human Institute for Humanity, we can interpret the work under a new light: that of posthumanism and institutional critique. Pellarini’s project de-centers the Man of the western modernist tradition as a white, cis-male, heterosexual subject to include other ways of experiencing human-ness and belonging, as conceptualised by Rosi Braidotti in her book The Posthuman. For example, being an alien, a non-human, is also a way of experiencing one’s identities in the 21st century and it is a concept explored in the artwork during the performances, when the performers embodied alien creatures. Another element that goes beyond the figure of the Man as the only way to experience humanity are the photographs shown in the installation, which are based on the archetypes of the tarot deck. The photographs include figures from diverse racial backgrounds and gender expressions. Every subject and way of being is welcome to be part of the Non-Human Institute for Humanity!

Our ways of being human or non-human are not the only ideas challenged in the work of Pellarini. The artist calls us to re-imagine what an inclusive institute can look like. To do so, she adopts “a mindset of deconstructing and recreating”, resulting in an institute that leaves behind the institutionalized power structures and hierarchies, such as the prevalence of a specific race or gender over others, and opts to create an all inclusive platform, especially for those who have felt like they don’t belong. The departing point for this idea has been the artist’s own lived experience of growing up in Venezuela while being of Italian heritage, and currently experiencing migration in the Netherlands. As a migrant to the Netherlands myself, I am sometimes torn between leaving Greece, my home country, and creating a new home for myself in Northern Europe. Art has eased the transition from one region to another and it is precisely works like Pellarini’s The Hon-Human Institute for Humanity that create a new sense of belonging for all of us who have felt like outsiders at some point in our lives.

With special thanks to Samantha Pellarini and Irene Urrutia for our fruitful discussions about The Non-Human Institute for Humanity and the care and generosity with which they shared their experiences. Katerina Kallivrousi is a researcher, cultural producer and art mediator based in Leiden, The Netherlands and in Athens, Greece.

Katerina holds a BA in Modern Greek Language and Literature from the National and Kapodistrian University of Athens (2017) and a Research MA in Contemporary Art & Culture from Leiden University (2021).

Her research interests lie in the domains of contemporary art, postcolonial theory as well as critical gender and race studies. Intersectionality is key to Katerina’s approach as it enables a better understanding of the correlations between art and contemporary sociopolitical issues.

As a young art professional Katerina is very much interested in conscious curatorial practices, institutional critique, and artistic activism.