On Vanina Tsvetkova’s ‘We, ourselves, and us’

In the framework of LUNA Young Masters, a project initiated by MEDIA ART FRIESLAND, I was invited as a young and emerging curator to write about an artwork from the LUNA festival. Together we, the five international emerging curators, explored the exhibition space with the guidance of Irene Urrutia, the curator of the LUNA YM, in hopes of finding the artwork that attracted each one of us the most.

Towards the end of the tour that Irene gave us, we stopped by ‘We ourselves and us’ by Vanina Tsvetkova. The connection I established with the artwork was not immediate, but the more time I spent at the exhibition space in Stationskwartier in Leeuwarden the more I could relate to it on numerous levels. Here is why: I am a curator in training with TASAWAR CURATORIAL STUDIO; however, I do not come from arts, art-sciences or any other art-related context. I actually come from an engineering background. It might seem strange or uncommon, but I have been actively involved in the arts for a while now mainly through my experience with INTERFERENCE, an international light art project in Tunis.tn, as an art mediator and as a curatorial collective member.

Vanina’s artwork presented a meeting point for my background as an engineer in the making and my career as an emerging curator. And even though I cannot strongly contextualize the artwork in art history, I can most definitely make sense of it from an engineering point of reference especially in the context of media art.

I use the term “engineering” deliberately here. To some it might be out of context, but I personally wouldn’t refer to the work behind Vanina’s artwork otherwise. My curatorial work is influenced by my background in the sciences and technology. I would most definitely recognize an engineer’s work (or almost immediately) and would start dissecting it and studying its different aspects in hopes of understanding the mechanisms behind it, like any engineer would do.

The case of Vanina’s artwork was one of those moments. The first question that popped in my mind after experiencing the artwork was “who designed the software?” and to my surprise, Irene Urrutia, the curator of the LUNA Young Masters program, answered that Vanina herself was the mind behind the building of the installation.

Usually, and for most of the responsive artworks that I have seen so far, artists conceptualize the idea of the artwork they want to produce, and then an actual engineer executes and concretizes the artwork for them. From the coding to the testing and troubleshooting, it’s all done in collaboration with engineers. However, in ‘We, ourselves, and us’ it’s very different as Vanina built everything herself from scratch. From the coding of the program behind the projections to the accompanying sound and the hard wiring of the installation. That was very intriguing for me and pushed me to raise some questions regarding the relationship between art and engineering and how correlated they can be. Here, the engineering took over the artistic aspects of the artworks in a very subtle and elegant way as the execution was delicately well done.

Vanina, who holds a Master in in Fine Art and Design & MADtech (Media, Art, Design, and Technology) from Frank Mohr Institute at Minerva academy in Groningen, was influenced by the multidisciplinary aspects of the study program that she followed which here I think is playing in her favor. She identifies as a problem solver which highlights her considerable interest in the different engineering aspects. She is very dexterous in her work. For an artist to play the role of an engineer, that is very uncommon and liberating as it’s freeing from all the constraints that limit the engineer’s work. And by limitation here I don’t mean the physical world and scientific limitation but the boundaries that we constrain ourselves with when solving a problem and having to optimize the solution in the best way possible. I would say that the difference between an engineer and an artist adopting this role is the freedom that comes with it, since you’re building the system without being extremely careful about abiding by the rules governing it.

The installation is not very complex once you hack the way it works. The process of figuring out how it functions is very playful to begin with. Picture an almost completely dark room, illuminated by one small light projector. A wide screen behind the light source, an amplifier, and what looks like a camera. It is indeed a camera. In front of the screen there is an intricate setup of mixing tables, a computer and other devices that are handmade. There is also a guitar near this setting.

You take a few steps towards the screen and… nothing happens. But as you get closer entering the camera’s field of detection, you start to hear a sharp sound and a projection appears on the screen. It’s your image, but a distorted one. As you move, the image in the projection follows with a slight delay. The sound from the installation fills the dark room, now illuminated by the activated projection. The sound surrounding changes pitches and harmonies as you move in front of the camera. The projected images travel horizontally on the screen, recording your movement in the space. There are no restrictions but the technical ones in this framework.

You can play around within the range of detection of the camera and observe how the system reacts to your presence. The response of the system is distinct each time. Many factors influence this response. It could be the color of your clothes as well as your movement in space. As a matter of fact, the lighter the colors you wear, the more interesting the response gets. However, the darker the clothes are, the more invisible you get.

Once you enter the room where the installation was set, you are somehow inscribed into the system. You become a protagonist in your very own play. You become the artist within this framework where Vanina’s work becomes the blank canvas, and your body is the brush. You become a painter, and an actor in your very own scenario with the freedom to behave the way you wish. However, this freedom is delimited by the system itself. As you become part of it, you most definitely subscribe to its rules. You will find yourself unintentionally and involuntarily accepting the terms and conditions that come with technology and in search of how to make your way in the universe you put yourself into. In such a situation, many questions arise about our relationship with the technological systems that we subscribe to in our daily life and how we navigate through them.

What was interesting about ‘We, ourselves, and us’ was the interaction of the audience with the digital system. The encounter between humans and the system is very intriguing to study. To me, it represents or somehow mocks the first time we ever dealt with technology and here’s how: once you enter the exhibition room, you stumble upon the dispositive made by Vanina. You probably wouldn’t know how it functions exactly, but you would venture into space and just play around, rather randomly, until you ‘hack’ the code of the system. And to me, that summarizes our relationships with the different technologies and gadgets. Most of us would not bother to read the manual before using a machine, object, gadget, etc. We would mostly discover it on our own following our pace. Vanina, here, plays with this mind-set and puts up a challenge for the viewer, which is figuring out how her system works and then owning it. Owning it comes from the fact that each ‘painting’ or ‘performance’ is unique to its protagonist. Each interpretation is personal and specific.

‘We, ourselves, and us’ highlights other prominent concepts in Vanina’s work which are distortion and glitch. The camera in this digital system records your image and movement and then replays it with a slight delay, distorted or glitched as if the video is lagging. I personally think that this distortion is a metaphor to the particularity of our lives in the digital realm and our perception of it. The image you see with your eyes represents the analog realm, however the way you perceive the digital is very different from reality, thus the disturbance. This gap between the two realms causes this disturbance of reality, represented here by a glitch/distortion effect.

The output of the system is very abstract, or even absurd. It doesn’t necessarily have a logical explanation or meaning but is there for you to experience and play with to feel its effect on you.

Originally, this installation is accompanied with a performance that I unfortunately didn’t get to experience until the end of my stay in Leeuwarden. I could safely say that the performance is another realm of its own with many facets to explore and to study. From the masked performers to the homemade instruments and sound boxes. The two artworks do not necessarily relate to each other to an extent. It can be frustrating that you would suspect whether they were authored by the same artist or not. After a conversation with Vanina, I could somehow relate them to each other, but the lines are still very blurry. The performance is as intriguing as the installation but let us focus on the latter for the moment. 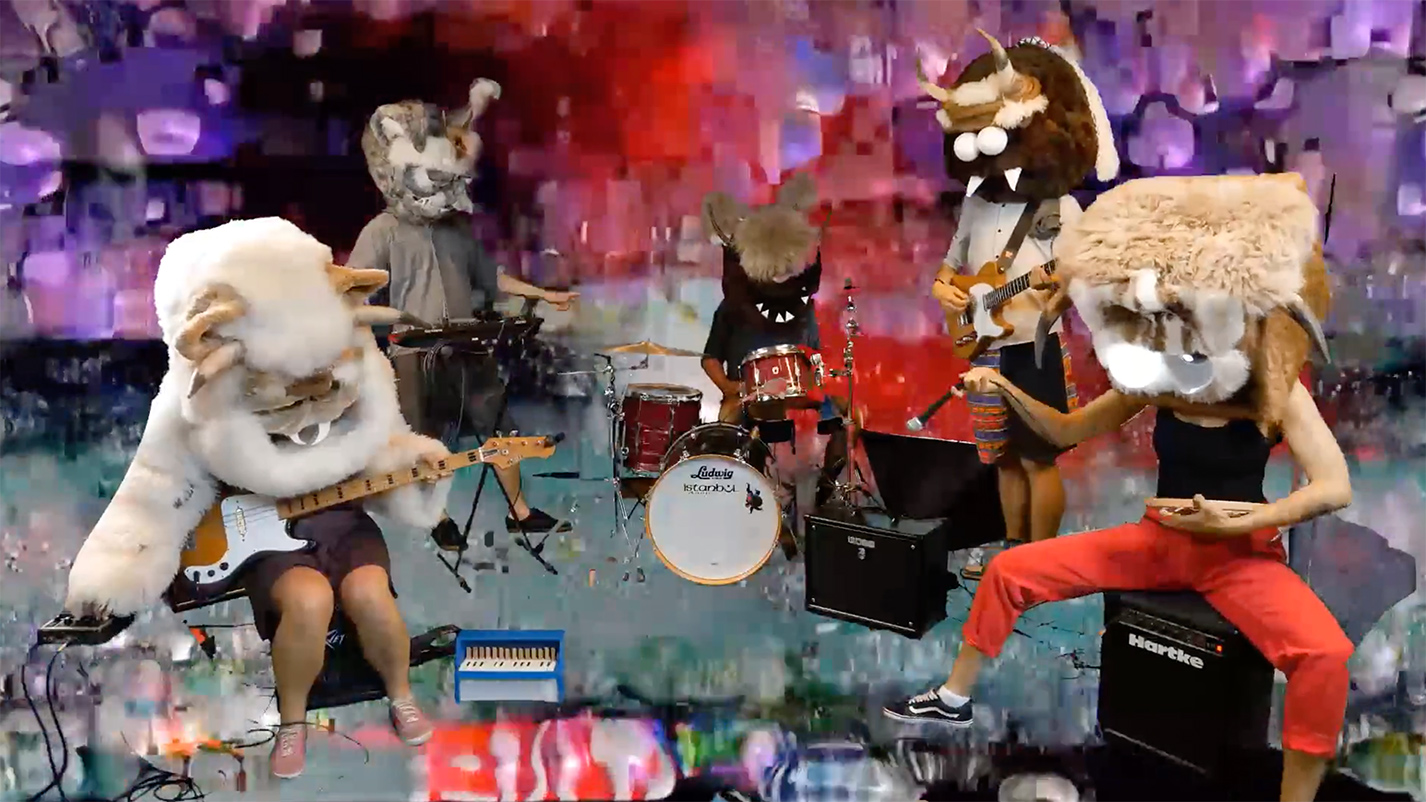 With such an open and inviting artwork, one would think that they’re free to perform however they wanted and feel liberated from all restrictions and restraints. However, I would like to point out that, here, we are just feeding the system with our presences; but are we able to change it? I would like to highlight the difference between an interactive installation and a responsive one through the example of ‘We, ourselves, and us’. This installation is a responsive artwork, as it does not interact or change with a person’s presence. It just responds to your presence in a certain way. However, an interactive artwork or installation would react to the public’s presence and change its response accordingly. The distinction is not that obvious, and we tend to confuse the two terms, especially in spoken language.[1]

In this case, the more you play with the artwork, the more questions it would trigger about its interactivity and its ability to adapt to you. This makes me reflect on the digital world that we’re diving into without any resistance. It’s making me question our relationships with this realm and how to be free from all the restrictions it imposes on our existence. Most of the technologies that we’re using today are enabling us to do more than we could ever imagine which is liberating in a way. However, they’re restricting our existence with their limitations. Just imagine the number of things that you will be deprived of if your phone battery dies!

On this note, I would like to close with a concern that this artwork has triggered. I think that we must rethink our relationships with the digital reality that we’re moving into and that we reevaluate the concept of freedom within this realm.

[1] This distinction was made based on discussion between Meriam and curator Bettina Pelz. Meriam would like to express her gratitude towards Bettina who has contributed to the making of this text through her valuable mentoring and guidance. Many thanks for initiating this program and for making the journey to the Netherlands an impactful one.